The early stages of Crash Twinsanity were fraught with a whole lot of misdirection and indecision. As a result, the first 2.5 years of development were pretty much thrown in the bin as we started again. This page is dedicated to all the poor enemies & NPCs that were cast asunder and forgotten. 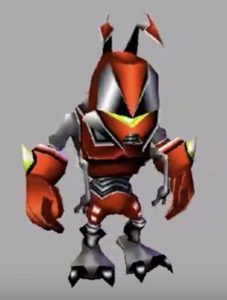 In the earliest iteration of Crash Twinsanity (when it was known as Crash Evolution), the ant enemies came in three different sizes. The small variety was fully modelled & animated and I think they existed in a couple of early builds. In the final phase of development they were completely remodelled from scratch, where they gained their big cheesy grins. I think the main reason they were rebuilt was because the skeleton was far too complicated. They had six fully articulated limbs in the original version (because they’re ants innit). We ended up making multiple variations of the small ant which only showed up in the last levels of the game (Jetpack/grenade ant, Fire ant, Drill ant). 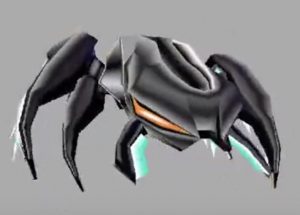 The small ants could be found in the game riding large “mite mechs”, seen here. You could attack the mech or you could jump up and swipe the rider off. I remember seeing this in test levels. It never really felt “right” to have Crash fighting large enemies with spin attacks. Maybe this was one reason we dropped them. I’ve got a vague memory that these guys played a part in the Neo Cortex Hoverboard sections but I was never directly involved with those. 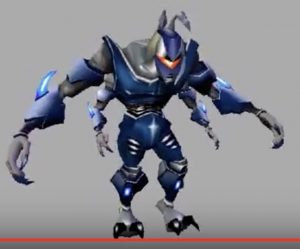 These guys were the medium sized soldiers in the Evil Twin’s ant army. They were fully modelled & animated early on in development. They were quite a bit bigger than Crash and it always felt a bit awkward fighting them. This is probably why they were never rebuilt later on in the game. They were one of the first AI behaviours we worked on when the AI system was young in development so they never really worked that well. I remember they just walked towards Crash while swinging their arms and staggered about when you span into them. 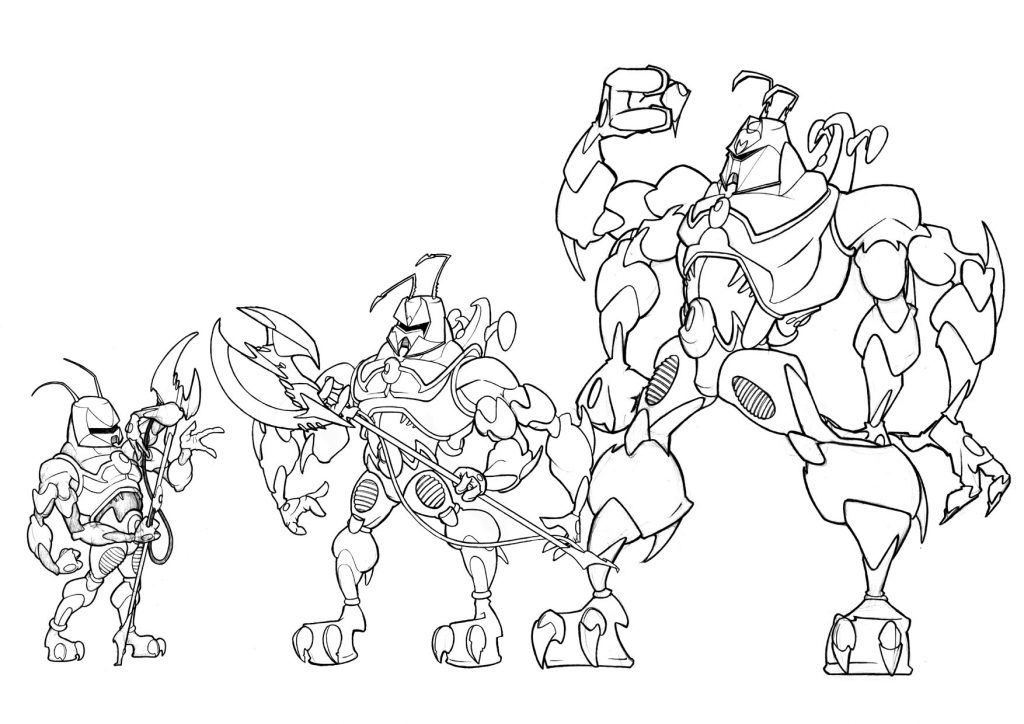 These guys were massive. They were fully modelled and animated early in development. We used them in an early prototype level (in the spaceport level I think) in a stealth gameplay section. They were standing on a pillar in the center of the room, and Crash had to sneak around out of sight which sliding underneath checkpoints. The ants would jump around 90 degrees every few seconds. This never really worked that well so there was no urge to resurrect it later on in development. Personally I think stealth sections are rubbish. Definitely the kind of thing that game designers put in their games when they’ve got no actual good ideas left. Having said that, an evolution of this Crash Twinsanity stealth idea ended up in the final game, with the Tribespeople instead of Large Ants… 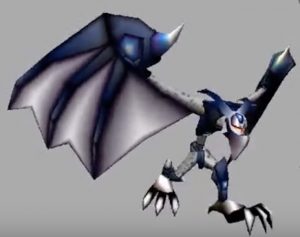 The Gargoyle was a flying solder in the Ant army. It was designed to be perched high on ledges, and to swoop down once Crash approached. It had an attack where it spread its wings and fired out a gout a blue frame which I was quite chuffed with at the time. I seem to remember it was one of the first enemies that we were able to get moving around the level and interacting with Crash in an entertaining manner, as the AI system was starting to come together nicely at this point. It was one of many things that was forgotten as the “Crash Evolution” era of development ended and “Crash Unlimited” began. 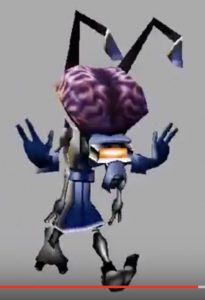 These guys were the brains of the twin’s operation. They were inspired by the “brain bugs” in Starship Troopers and as such they had big bulbous brains that wobbled about as they moved.

I’m fairly sure these were remodelled late in the game to have a more obvious white labcoat. I had them 99% scripted and working in game. They lobbed chemical flasks at Crash which exploded on impact. I was planning to squeeze them in to the last level of the game, but unfortunately time was too tight and they never made it… 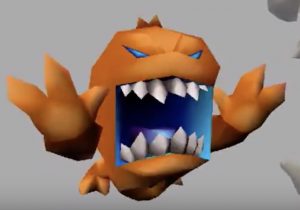 I can’t remember which level this guy was supposed to live in, but he became my testbed for a lot of the reusable behaviours which ended up powering most of the creatures in the game. He was supposed to have the ability to eat crates, which would deny the crate to the player. I remember arguing with someone at the design stage that this crate-chomping behaviour wouldn’t be possible with our AI system at the time. We probably could have made it work towards the end but the Vermin creature got left behind in the Crash Unlimited rebuild. 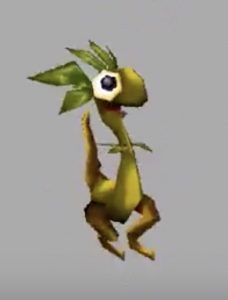 These two were one of the many enemies that were designed in the “Crash Evolution Era” and were fully modelled and animated. They were intended to live in the “Gaudi Greenhouse” world. I think the idea was that the little guy was completely harmless and would aimlessly hop around until he came in contact with some concentrated wumpa fruit energy, where he would instantly transform into the more formidable “Daddy Plant” and chase the player. I don’t believe they were ever scripted up in the game as the AI system was at a very early stage at this point, but I could be wrong as another designer was responsible for them. 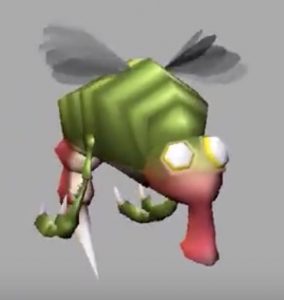 Another denizen of the “Gaudi Greenhouse” world. It was supposed to buzz around sucking up wumpa juice, and launch itself at Crash with a stinging butt attack. Crash would have to dodge the initial attack and finish it off after its stinger got embedded in the ground.

I’ve got no idea what this was supposed to do as this level was another designer’s territory. But here it is anyway!

I spent a whole lot of time messing around with the mushroom guy at the start of the second phase of development. At the time, we were experimenting with ambient “ecology” AI behaviours which would play out around the player as he was exploring the game world. I set up a really fun test scene where a flock of mushrooms would hop around, desperately trying to evade the tribesman who were out on a mushroom hunt. They would impale the mushrooms with their spears and carry them back to the campsite before heading out again. It was really fun to watch, especially because the mushrooms made a ridiculous chicken noise when stabbed. Some footage of this test scene has managed to survive, check these videos out: 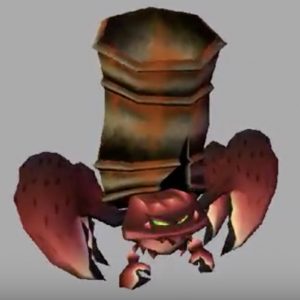 These guys actually managed to survive into the final game, but they lost their barrels along the way and gained a more traditional shell. This version was originally intended for the “Ocean Floor” region of the Earth zone. A seabed which had been drained by the Evil Twin’s nefarious activities. 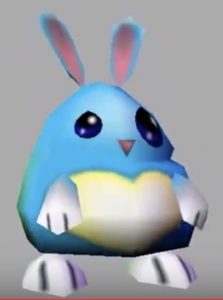 This was one of the cute critters from the “Gone a bit Coco” level that took place inside Coco Bandicoot’s mind. There were 3 variations of this little guy that all shared the same skeleton & animations. I can’t remember what animals the other two were but I remember that one was red, one was yellow! The idea was that they they would swarm all over Cortex and hug him to death while he tried to keep them at bay with his laser gun.

The skeleton of the model was kept as simple as possible so we could have loads of the little blighters on screen at once. I think it only has 5 or so bones in it. I personally thought the gameplay we ended up with was pretty fun, with Cortex manically running around shooting up the hundreds of little guys.

One planned feature was for them to peep out from behind crates and wave at the player, as you can see from one of the animations here, but this was never implemented before the whole level was cut. 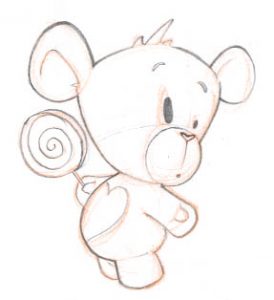 This was intended to be the medium sized critter in the “Gone a bit Coco” level. The idea was that he would hold out his lollipop to reflect Cortex’s laser bolts and protect the other critters. Cortex had a “charge blast” move which would destroy the lollipop. I don’t believe that this enemy ever made it beyond the concept stage. I certainly never made any in-game behaviours for him and it didn’t exist in the level before it was all cut. 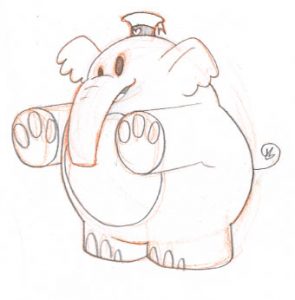 This was the large sized cute critter from the cut “Gone a bit Coco” level. I can’t remember what the initial plan for its behaviour was, but we ended up making it a spawner for the smaller critters. The Elephants would wander around and spawn the little guys out of their trunks. If you didn’t make haste and kill the elephants you’d quickly become overrun by the smaller critters. I had great fun making the AI behaviours for these guys and the animators made some great motion. The piece de resistance for me was the spawning animation (seen here), I made an absolutely hideous oozing particle effect which dripped out of the elephant’s trunks when it spawned the little guys. Sadly now lost forever down the memory hole…